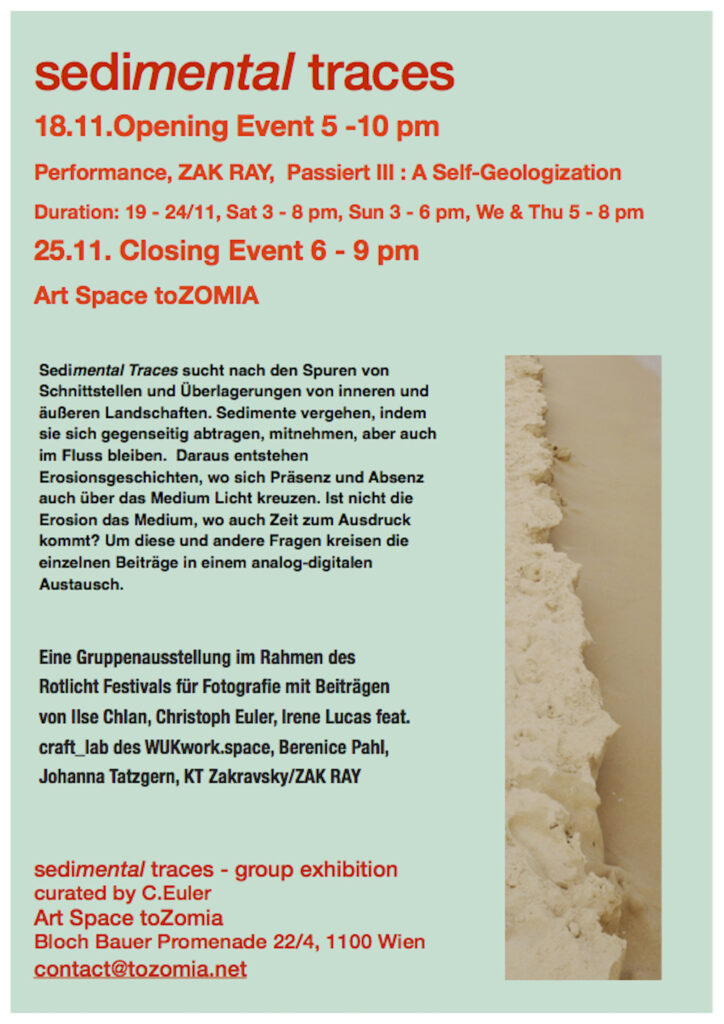 Sedimental Traces searches for the traces of interfaces and overlays of inner and outer landscapes. Sediments pass by eroding each other, taking each other with them, but also remaining in flux. Erosion histories emerge from this, where presence and absence also intersect through the medium of light. Isn’t erosion the medium where time is expressed? The individual contributions revolve around this and other questions in an analogue-digital dialogue.

The village is located in one of the areas of the Iberian Peninsula with the highest rainfall. In 1972 it was flooded to fill the reservoir for a hydroelectric plant. A fertile land, a participatory democratic village community, were sacrificed to energy production. In 1989, after a winter with little rain, the place reappeared. The villagers who had been relocated came to see their old village again. Amazement at the unexpected appearance of the past and sadness at the loss.

A journey into analog photography and the time of slide projection, with the possibilities of the digital technology of the present.

Sand as sediment creates different scenarios of erosion at the seaside. It forms a symbiotic relationship with water and generates a vivid and liquid border in various directions. At the same time sand represents the world’s most widely raw material after air and water, -specially in the form of concrete for the constructing industry. The beach line offers endless views as a place of longing. Territories and properties are marked out at different scales on a shifting ground. A multitude of techniques of built resilience is tested against the gradual devastation, a paradox circular struggle between human behaviour and the sea.

As part of the Expanded Garden-Favoriten art project initiated by Irene Lucas, a joint workshop between her Solarmanufaktur and the analogue-mobile photo lab of the WUK.work.space will take place with Guntram Münster and young people. Self-made pinhole cameras meet solar-generated slow food and interact with sunlight. The visual results will be on show.

Two photo albums. 1936-1943. The tracing of secrets and falsified family narratives. The physical attempt to fill the voids and break through spirals of emotions. A journey, a stride through sediments of violence and misguided love. Layers of feeling materialize in photographs and traverse places I walk. Paper, air, soil and skin touch and penetrate each other. A history of silent witnesses. Concrete bunkers, barracks, trees and sand. Preserving and burying. Breathing, growing and passing away. An analogy. Traces of guilt and shame trickle, dry up, clump and condense. Drive new formations of speechlessness, grief and violence but also hope through the generations.

The video was made in the early 2000s. A group explores the boggy terrain of Vermont barefoot. Daniel Lepkoff, an American dancer and author, took us there as part of a workshop! How can a connection be made from then to now? What perceptions and layers of time does the in-between produce? Which sediments remain? Starting from the video created back then, the current work emerges between analogue and digital connections and with an open unforeseen outcome.

In this great upheaval, in which human activity is causing geological change, our short lifetime presents itself as a fine layer of a planetary deep time. Renegade human history reinserts itself into the architecture of sediments, becoming narratable – and bearable – in a different way.

Continuing a lecture performance series on episodic biography with anecdotes and printed photos, “Passed/Passiert,” I attempt to present my biography as a deposit of sediments.